Cryptocurrency is gaining traction in Africa, despite the skepticism of many people and strict regulations in various countries. Nigeria, Kenya, South Africa, Ghana, Zimbabwe, Kenya, and Ghana are the leading African countries in crypto adoption.

They have the highest demand for digital currency, as well as the most active cryptocurrency communities in their respective countries.

Also, African countries like South Africa, Nigeria, and Kenya are amongst the top 10 countries in the world where people are using cryptocurrencies the most. How quickly are African governments adopting new technology?

To date, Nigeria has banned cryptocurrency and warned its citizens that their investments in it are unprotected under Nigerian law, despite the country having one of the most active peer-to-peer Bitcoin trading markets in the world.

All Nigerian banks and financial institutions were warned by the CBN (Central Bank of Nigeria) on January 12, 2017, not to use, hold, trade, or transact any virtual currency. Anyone who deals in cryptocurrency will have their bank accounts closed by the CBN on February 5, 2021.

In addition to Nigeria, the use of cryptocurrency has been banned in countries like Egypt, Algeria, Namibia, Zambia, Libya, Morocco, and Zambia. It is not illegal to use cryptocurrency in Kenya, but the country’s government does not offer any protection for cryptocurrency businesses in the event of a failure, as it isn’t legal tender.

Why Cryptocurrency Adoption Keeps Growing In Africa Despite The Challenges

One of the reasons why Africans are turning to cryptocurrency is because of the country’s economic instability. People in African countries can shield their earnings from the effects of a faltering economy thanks to companies like Bitcoin, which have no single domain and no control over the inflation rates of any one country.

Also, using Bitcoin for international transactions is a lot more convenient. As an example, in Nigeria, the operation of Paypal has been once prohibited due to fraudulent and money laundering activities, but cryptocurrency companies use blockchain technology, which stores public records in a decentralized system, as an alternative.

As a result, they are unable to halt transactions coming from any particular country. In addition, because cryptocurrency transactions are decentralized, there are no intermediaries to slow them down, making them more efficient.

According to Chainalysis, African countries bought about $106 billion worth of Bitcoin between July 2020 and June 2021.

A study by a research firm found that Africa has one of the lowest crypto economies of all regions studied.

Four major trends in African cryptography are discussed in the report, including:

However, even though the continent’s crypto-economy is small, Chainalysis has found that the top 20 countries in the world for grassroots adoption of cryptocurrencies are all in Africa: Kenya, Nigeria, South Africa, and Tanzania.

To get a sense of grassroots adoption, you can look at the percentage of total transaction volume in a region that is comprised of small-ticket purchases.

Africa’s share of the global population is slightly higher than the global average of 5.5 percent, according to Chainalysis data. 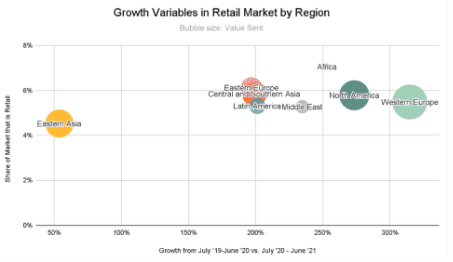 Although P2P volumes make up only 2.6 percent of the total African transaction volume, African crypto consumers are the highest user of P2P services on the global scale. 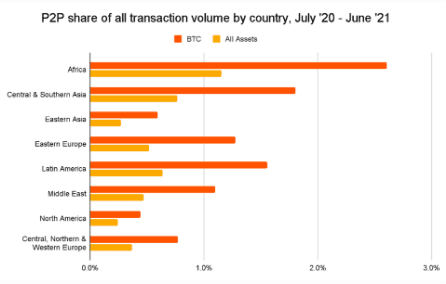 It is because the governments of Nigeria and Kenya, two of Africa’s leading crypto-adoption countries, have made it difficult for crypto-related businesses (like exchanges) to work with banks.

Earlier this year, Nigeria’s central bank sent a letter to the country’s banks, stating that licensed financial institutions are not allowed to deal in cryptocurrency or facilitate payments for cryptocurrency exchanges.

Coins such as Bitcoin and Litecoin were used to fund the movement after Nigerian banks closed the accounts linked to the protest.

When it comes to cryptocurrency, the Kenyan central bank has warned financial institutions not to deal with it in 2018.

Consumers who had previously used their debit or credit card to transact in the cryptocurrency have been receiving warning emails from some Kenyan banks, according to the local bitcoin blog, as of June 4.

P2P platforms that don’t directly support transactions have become increasingly popular in these countries as a result.

Chainalysis found that between July 2019 and June 2020, Africa had the highest cross-region value of any region studied. Remittances via cryptocurrency may be increasing among Africans. 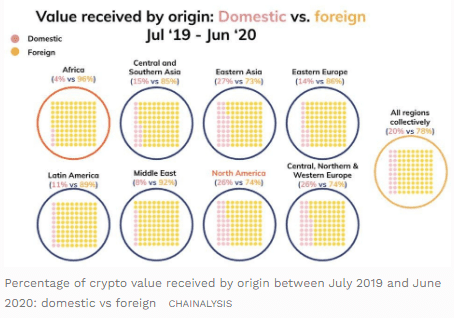 According to the research, the maximum amount of money that can be expected to be sent to Africa is $1,000. 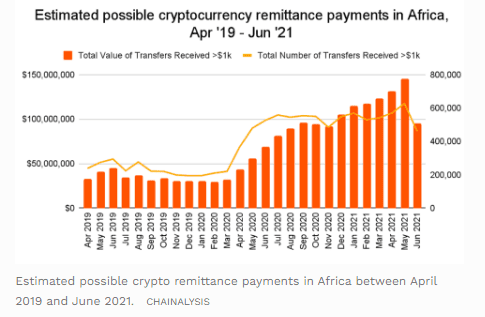 Over half of the estimated $48 billion in remittances received by Sub-Saharan Africa went to Nigeria, according to a Brookings Institute study.

Furthermore, remittance data from the World Bank shows that sending money to Sub-Saharan Africa is the most expensive option.

It has long been argued that cryptocurrencies, in general, will speed up and lower the cost of international payments.

Several African countries are experiencing record levels of currency risk. According to the Central Bank of Nigeria, the country’s currency has been devalued by nearly 35 percent in the last five years.

In a country that imports more commodities than it exports, constant devaluation erodes the wealth of Nigerians (excluding crude oil).

Artur Schaback, the CEO and co-founder of P2P exchange Paxful, claims that currency depreciation has boosted the exchange’s growth in Nigeria.

P2P volumes typically rise after the currency devaluation in both Nigeria and Kenya, according to the researchers’ findings, confirming Schabacks’ hypothesis.

In Africa, many business owners want to expand their operations to a global scale. Blockchain and cryptocurrency have been used by some of these businesses as a way to attract international attention and protect their businesses from currency devaluation. So, even if the government bans cryptocurrency, virtual currency transactions will continue to take place online.

5 Must Have Cryptocurrencies Before 2023

What Are Soft Forks?

What Are Crypto Whales: A General Overview

How To Earn Crypto Passive Income With Forks And Airdrops

All You Need to Know About Zugacoin – The Future Of Money

5 Big Mistakes You Need to Avoid in Crypto

How To Preserve Capital During Inflation Using Cryptocurrency

Is Prestmit A Good App For Beginners?

How To Sell Gift Cards For Bitcoins instantly in 2022

Top Bitcoin And Blockchain Books To Learn About Blockchain Technology

What Is The Difference Between Cryptocurrency And Traditional Banks?