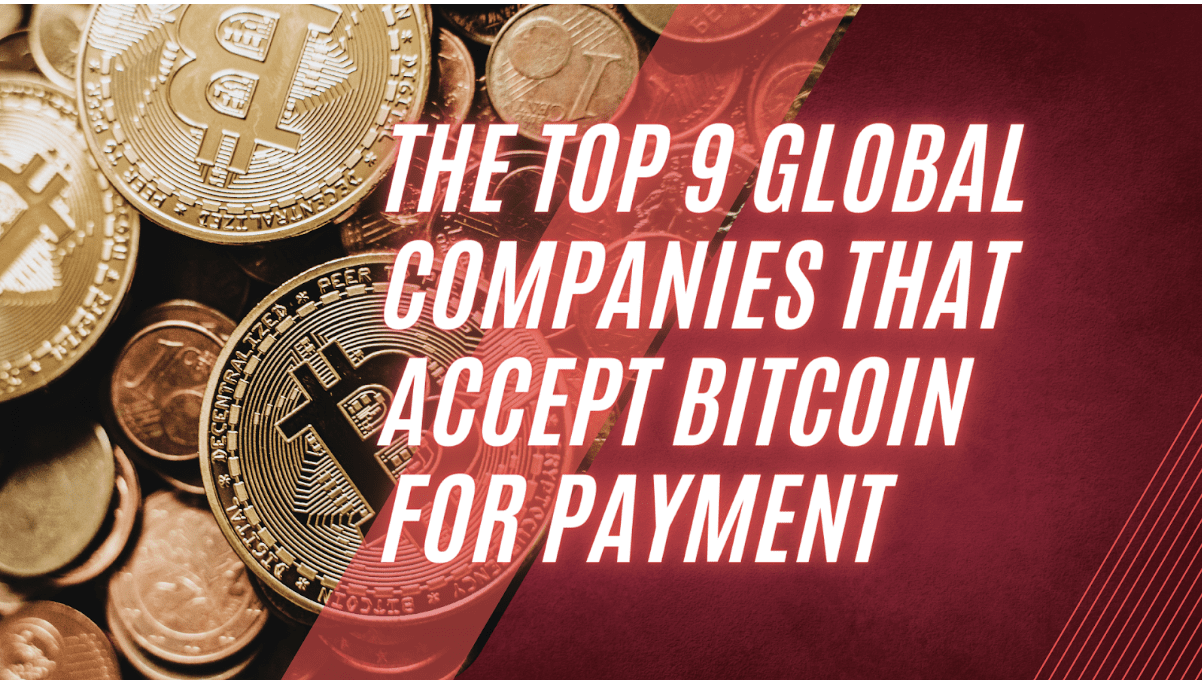 The world has come to a point where people can use digital currency to pay for something. In the past few years, Bitcoin (BTC) has been a legitimate currency to send money without using banks. This opens up a lot of opportunities for those who don’t have access to standard banking services.

As of this year, over 40 million wallet addresses around the globe use Bitcoin. And this will increase in the future, especially since more countries are legalizing BTC as currency. There are a lot of cryptocurrencies that businesses accept, and bit currency is among the most popular ones.

While not every business does this, you can pay with BTC to these major companies around the world.

What Are Bitcoins and How Can You Use Them as a Mode of Payment?

If you’re new to cryptocurrencies, you should know that Bitcoin lets you pay without using cash. Banks and credit card companies also do the same. With Bitcoin, you don’t need anyone to prove you own it since it’s decentralized.

People produce or “mine” these coins when computers manage the currency process. A decentralized network of computers (blockchain) carries out this process.

The technology serves as a distributed ledger to record monetary transactions. It resembles a vast public database of all transactions that happened. It also keeps track of everything to confirm the legitimacy and ownership of the currency. And since the cryptocurrency is decentralized, this means you can’t buy it from anywhere.

There are certain platforms and exchanges where you can buy, sell, or store BTC. You don’t need to have an account with a bank, exchange, or company to do this. But it makes the process easier if you’re new to cryptocurrencies.

You can convert BTC to dollars on a licensed cryptocurrency exchange. Some also let you store the currency in a wallet. This way, you can gain access to your coins for easy transactions. More importantly, some platforms have a price chart for you to check how much bitcoin is currently worth.

If you own bitcoins, you need to know the current bitcoin prices all over the world. Bitcoin Kurs or prices vary from country to country. A bitcoin price live chart lets you find the best opportunity to trade in the market if you plan on trading bitcoins.

Not only that but this will help you convert bitcoin to different currencies around the world. Although bitcoin is gaining popularity among businesses, it’s still not a widely-accepted mode of payment.

Fortunately, you can convert bitcoins to dollars easily and gain access through different ways. As of today, 1 BTC in USD is $16,000, and this can increase or decrease on succeeding days. If you have You can cash out bitcoins using third-party broker exchanges or peer-to-peer platforms. You can also transfer bitcoins to your bank account.

Which Companies Use Bitcoins for Payment?

While converting bitcoins to dollars is an option, you can still use BTC to buy from some companies. Not only do major companies adopt this digital currency payment but also small and medium-sized businesses.

Here are some of the big companies worldwide where you can use bitcoins as a payment method.

Paypal accepts Bitcoin as a mode of payment. And it makes sense since this is the company that made digital currencies popular.

Accepting cryptocurrencies was PayPal’s move to entice businesses, not consumers, to its platform. The appeal was that its transaction costs were low. This is compared to the 2 to 3% fee that companies had to pay when using credit cards.

Just recently, Paypal has made it possible for customers to use their wallets to check out with bitcoins. With its “Checkout with Crypto” feature, you can easily convert bitcoins to dollars without additional costs. You can also use other cryptocurrencies such as Ethereum, Litecoin, or Bitcoin Cash (BCH).

One of the Bitcoin merchants that take virtual currency as a form of payment and keep BTC is Overstock. As early as 2018, they have been heavily investing in blockchain technology.

This major online retailer now accepts all cryptocurrencies. Aside from BTC, you can also use Ethereum, Litecoin, Dash, and BCH alongside its gift cards and store credits.

Microsoft is one of the early adopters of bitcoin since it started accepting it as a payment last 2014. You can buy games and software with a list of cryptocurrencies at that time. But since digital currencies were not widely-known back then, they decided to stop accepting BTC.

Now that more people are aware of it, Microsoft is now back to accepting BTC as a mode of payment. Not only that but they are on the lead of investing in the first decentralized data warehouse. They integrate this into Microsoft Azure, a cloud-based service that makes it easy to develop, deploy, and expand blockchain applications.

The company doesn’t directly accept bitcoin as payments. This means you’ll have to convert your Bitcoin into a currency they accept. But since Home Depot uses the Flexa system, you can easily do this and check out the items you want to buy. This makes the process easier since you won’t have to do it on your own.

But before you visit the store or website, make sure you know cryptocurrency values. You can search “bitcoin price in euro” if you’re within the area. You can also check with the cryptocurrency exchange where you’re storing your bitcoin. That’s why it’s important that the exchange you’re using also displays a live bitcoins value chart.

Starbucks is adopting a different strategy by allowing its customers to use bitcoin to pay for their coffee. Last year, Starbucks partnered with a cryptocurrency platform to make this happen. Now, customers can convert BTC to dollars to buy coffee using the Bakkt cryptocurrency conversion app.

But you should know that the coins will automatically transfer to your balance on the Starbucks app. So you need to have one installed right away before going to the store.

Like Home Depot, Whole Foods also uses Flexa to give their customers an extra mode of payment. It uses the same technology as other Amazon businesses: it converts digital currency directly into US dollars.

In addition to this, Whole Foods has upgraded to the Spedn app. This way, customers can buy food and consumables using a list of cryptocurrencies, like Litecoin and BTC.

The world’s largest telecom company, AT&T, also accepts BTC as a form of cryptocurrency payment. To do this, you need to use a third-party service like BitPay.

In essence, BitPay accepts your Bitcoin payment on behalf of AT&T and confirms it. But, like many other third-party payment processors, it retains a small portion of this payment. You can find a list of cryptocurrencies that BitPay accepts on their website. Some of these include Bitcoin, Paxos, Gemini USD, Bitcoin Cash, Euro Coin, and Ethereum.

Etsy as a whole doesn’t have a platform to accept bitcoin as payment. But, independent merchants can take cryptocurrencies in their individual stores. The merchant can include an “other” payment method option during the checkout.

By selecting that option, the merchant will message you with your preferred payment method. To finalize the transaction, the seller then replies with a bitcoin address. There’s also a page in the Etsy Community forum that can help you make the transaction easier. You can also find specific Etsy stores that promote bitcoins as a payment method on their site.

You can buy, send, and redeem your online gift cards through Gift Card Company Gyft. You can use Bitcoin to complete any transaction as a user, which is completely free of charge.

The process is as simple as it gets when you are on the Gyft website. You pick the gift card you want and choose BTC as your preferred payment method. After that, you can now send the money using your cryptocurrency wallet.

These days, you can spend your bitcoin pretty much anywhere. While some don’t let you use the cryptocurrency directly, you can still use it to buy third-party gift cards.

This list does not contain all businesses that accept cryptocurrencies. But, the businesses that are included in the list are some of the most well-known ones. And you can bet that other companies will eventually join the line-up.

Here Are Some Crypto News From October

Will Litecoin Be Ever Better Than Bitcoin?

3 Ways Bitcoin Is Better Than Other Cryptocurrencies

Best App to Sell Bitcoin in Nigeria in 2022

What is Bitcoin Mining & How Does It Work?

How To Sell Bitcoin In Nigeria In 2022

What Is Bitcoin Diamond?

What You Need To Know About Bitcoin Wallets