Even when people lose taste in everything, they can never lose their appetite for gaming. Games engage people and keep them busy and distracted from troubles. One good thing about this year is that there are plenty of great games that have already been released or are yet to be released.

If you’re a devoted PC gamer and Steam is your platform of choice, you may want to buy a Steam gift card  and redeem the gaming code to benefit from the exciting games on Steam.

Below are seven of the best PC games you can buy with a Steam gift card.

Before showing you the 7 PC games you can buy with a Steam gift card, you should understand that you must redeem the steam gift card on steam   and get credited to your steam wallet before you can be able to purchase games. 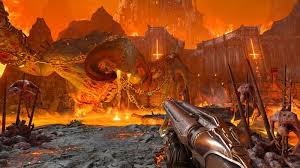 One of the year’s most highly rated games. Doom Eternal is the fifth main game in the Doom series and the sequel to Doom (2016).

Players will take on the role of Doomguy, who sets out on a mission to save the world by stopping Hell’s consumption of Earth and defeating the alien Maykyr before he destroys all human life.

Doom Eternal introduces a slew of new demons with more distinct abilities than before. Players will also gain a new dash ability.

To master this game, you’ll need tactics, strategies, techniques, and good resource management, as it’s not the typical run and gun game.

Fans of the Doom series will not be disappointed by this game’s sequel. If this game has been on your wishlist, now is the time to dive into Doom Eternal with your Steam gift card.

In Watch Dogs Legion, you can create your resistance and play as anyone. The goal is to reclaim London. You can fly with friends or alone – the choice is yours.

London is on the verge of extinction as a result of the private military, state surveillance, and rampant organized crime. Your mission is to erect a resistance to overthrow the enemies who have taken over your beloved city.

The ability to play as anyone is what truly distinguishes this game. Every person on the street has a unique back story, set of skills, and personality. In Watch Dogs Legion, anyone can become your weapon.

On your quest to conquer London, you’ll explore this vast open world and visit some of the city’s most iconic landmarks, such as Camden, Trafalgar Square, the London Eye, Big Ben, Piccadilly Circus, and Tower Bridge.

Hand-to-hand combat is possible with the new melee system, or players can choose from a variety of weapons and abilities. How you engage in combat will have ramifications, so choose wisely. If you use non-lethal force, you risk being arrested. Kill on sight, and your character will be killed forever. This is a very interesting PC game you can buy with a Steam gift card.

With A Total War Saga: Troy, you can witness history being made. You will decide the fate of the Aegeans. Every decision you make will affect Mount Olympus and the Lemnian deserts.

Troy combines grand strategy and real-time combat. It includes all of the mechanics, features, and complexities found in a Total War game.

Play as some of history’s most famous warriors, such as Hector and Achilles, Paris, Menelaus, Sarpedon, Agamemnon, Aeneas, and Odysseus are among the other major game characters.

Who will be the first to lay claim to the city of Troy? It is up to you to decide the fate of the land.

The gameplay in A Total War Saga: Troy is complex. It is your responsibility to:

In the game, mythological creatures are incorporated in more realistic ways. The legendary Minotaur, for example, is a hulking man dressed in a bull’s skull and hides.

During gameplay, you’ll need to gain favor with the Gods to influence battles, and players will be able to worship multiple Gods at the same time.

Total War Saga: Troy should be on your must-play list if you enjoy history, mythology, and strategy games.

The game takes place in Night City, a sprawling metropolis obsessed with body modification, power, and glamor. V, the protagonist, is an outlaw on the hunt for an implant that promises to be the key to immortality.

Players in Cyberpunk can customize their:

Every decision you make will have an impact on the world around you. Players can use a variety of weapons (all of which can be upgraded), as well as body-improving implants and hacking abilities.

The goal is to improve your street credibility so that you can get better jobs as an outlaw. To achieve this goal, you must eliminate everyone, from gangs to police and other mercenaries. Jobs will pay you money that you can spend on other things. The city is massive, alive, and filled with opportunities. You should buy this game the moment you lay your hands on a Steam gift card or at least have it on your wish list.

A reimagining of the classic first-person shooter game in an exciting prequel packed with carnage, explosive combat, and classic one-liners.

Chainsaw launchers, double-barrel shotguns, miniguns, automatic shotguns, and, of course, the iconic cannon are among the weapons available to players.

You can upgrade your toys along the way to increase the level of destruction and mayhem.

There’s also a 4-player online co-op mode if you want to play with your friends. You won’t want to miss this sweetness if you’re a fan of Serious Sam.

As a pilot, you and your team will explore unknown battlefields such as the moon Galitan and Yavin Prime. You can pilot various starfighter classes from the Imperial and New Republic fleets, such as the TIE fighter and X-wing.

Participate in epic 55 dogfights while immersing yourself in a new and unique Star Wars story. Engage in fleet battles, which are objective-based contests with multiple stages, .  even more excitement. What is the ultimate goal? To take out your adversary’s massive flagship.

Star Wars fans will not want to pass up the chance to play Star Wars: Squadrons.

The roleplaying game is party-based and features a complex storyline and strategic combat. The third installment of the series adds new elements such as environmental hazards, fluid action systems, and a player vehicle.

Wasteland 3 allows you to play co-op with a friend or go on a solo campaign. Your entire experience will be story-driven, regardless of which one you choose.

The game takes place in Colorado. As part of your mission, you will assist locals while also establishing a reputation in the state. Quests and the plot will force you to take on leadership roles and make difficult decisions.

The captivating story features a fully voiced dialog system as well as an immersive world. Your Desert Rangers team has been tasked with helping the Patriarch of Colorado protect his land from his bloodthirsty kids.

You’ll have to build your base from scratch, find a new vehicle, fight your way through hostile enemies, and train recruits. In this corrupt world, you’ll have to figure out who to trust and who to avoid. If you like what you see here, then this game should be in your library anytime you buy a steam gift card.

Do You Need an iTunes Gift Card to Update Your iPhone?

What are Google Play Gift Cards Used For?

Where Can I Buy An Amazon Gift Card In The UK?

How To Redeem Google Play Gift Cards in Nigeria

Is a Visa Gift Card the same as a Visa Debit Card?

How To Swap, Trade or Sell Gift Card You Don’t Need

How To Pay With Gift Card On PayPal

Why Every Lady Should Buy Sephora Gift Card