In 2021, non-fungible tokens were the hottest trend. In and out of the bitcoin business, they experienced global recognition, mainstream adoption, and overall acceptance.

The meteoric rise in popularity of non-fungible tokens (NFTs) resulted in a tremendous demand (and even greater supply) for a variety of collections, each with its own set of complexities and benefits.

The Bored Ape Yacht Club is without a doubt one of the most popular NFT collections, and it has even become the most expensive in terms of floor price (BAYC).

What Is The Bored Ape Yatch Club?

The Bored Ape Yacht Club is a one-of-a-kind club. It’s a virtual lounge for members only, and there will never be more than 10,000 of them.

BAYC is a collection of 10,000 Bored Ape NFTs in essence. These are one-of-a-kind digital collectibles based on Ethereum’s blockchain. Each Bored Ape also provides its owner membership in the club, as well as access to certain privileges reserved for a select few.

The Bored Ape Yacht Club isn’t alone in this regard; various NFT profile pic (PFP) collections, such as World of Women and Cool Cats, have recently sprung up. The Bored Apes, on the other hand, have a devoted following of collectors, and there are advantages.

The Bored Ape Yacht Club was founded by Gargamel, Gordon Goner, Emperor Tomato Ketchup, and No Sass, four unknown developers. Yuga Labs is another firm that assumed responsibility for the creation of BAYC.

BAYC’s narrative is actually extremely fascinating. Gordon Goner, one of the project’s creators, announced the pre-sale launch on Discord on April 23rd. There were essentially no reactions to the news itself.

During the week, there were just a few hundred apes, and it’s worth remembering that their owners hadn’t yet seen their NFTs and how they appeared. The reveal took place on April 30th, and once people saw the painting, word traveled quickly, and all of the apes were sold a day later for 0.08ETH each. 30 apes were set aside for team members, promotions, and prizes.

How Much Is A Bored Ape NFT Worth?

Bored Apes is likely to be one of the NFTs that gave early investors the most excessive returns. They were issued in April 2021 at a price of 0.08 ETH each, as previously stated.

While numerous apes went for six and even seven figures, Bored Ape #3749 appears to be the most costly. It was purchased for 740 ETH, which was valued roughly $2.9 million at the time.

The Bored Ape Yacht Club is marketed as an exclusive society or social organization, and holding one of the coveted NFTs grants you access to it. It gives customers access to a private Discord server, for example, where other owners, including celebrities, may hang out and chat. Apes also seem to congregate on social media, where the more recognizable avatars have formed a virtual fraternity.

More significantly, possessing a Bored Ape NFT grants you access to more NFT items, which you can then resell for potentially large sums of money.

Also Read: Why Should I Buy An Apecoin?

How To Buy Bored Ape NFTs

As previously stated, Bored Ape NFTs were first sold for 0.08 ETH each, but this pricing was only available for a limited time following the project’s introduction. The only way to get them now is through secondary markets, the most prominent of which being OpenSea.

To purchase a Bored Ape NFT, go to OpenSea and sign up with your MetaMask wallet. Once you’ve arrived, look for the Bored Ape Yacht Club collection in the search box and begin browsing. Here’s a screenshot of the dashboard:

After you’ve chosen the ape you want to purchase, click on the image to be sent to a new window where you may submit your bid: 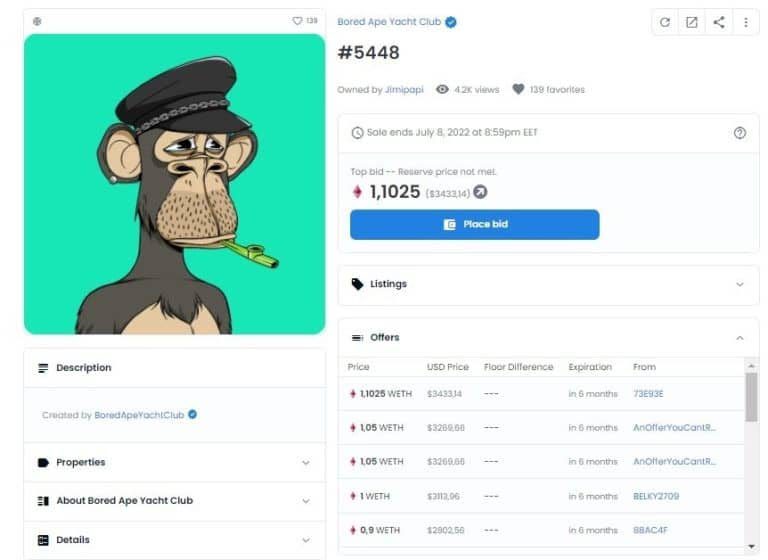 The NFT will be sent to your address if the vendor accepts your bid.

Make sure to connect your MetaMask to a hardware wallet like a Trezor or Ledger for added security. NFTs for bored apes are extremely costly, at least at the time of this writing, and there have been numerous examples of owners being duped and having their apes stolen. To ensure that your crypto is correctly saved, you should also follow some fundamental security precautions.

Bored Ape Yacht Club NFTs have gradually become the social media avatars of a growing number of notable people. Stephen Curry, a three-time NBA champion, purchased one in August 2021 for $180,000 in Ethereum, joining a list of athletes that includes NBA stars Josh Hart and Tyrese Haliburton, as well as NFL players Dez Bryant and Von Miller. Apes is also owned by musicians such as Eminem, Steve Aoki, and Timbaland.

Brands have followed suit; Arizona Iced Tea purchased a Bored Ape Yacht Club NFT in August 2021 and utilized it in marketing materials. Yuga Labs, on the other hand, told Decrypt that while the drink company can use the image of the NFT it owns, it was “wrong” to utilize the official Bored Apes branding.

Adidas purchased a bored ape in December 2021 as part of a larger metaverse play that included the release of a comic starring the character. More such agreements are in the works; Yuga Labs, the inventors of Bored, signed a contract with renowned music manager Guy Oseary in October 2021 to expand the brand into other entertainment mediums.

The Future Of Bored Ape NFTs

Although a big portion of the project’s roadmap has already been achieved, the continual team effort to find new pathways is one of the reasons BAYC has become so popular.

The play-to-earn phenomena developed in 2021 as an extremely popular trend that grabbed the industry by storm.

In order to develop a play-to-earn blockchain-based game, the Bored Ape Yacht Club has teamed up with Animoca Brands, one of the leading entities in the field of P2E.

Overall, the project appears to be evolving at a steady pace as the community grows. Ape owners own the commercial rights to their NFTs, so it’s in their best interests to keep moving forward.

How To Convert Your Digital Arts To NFTs And Sell Them

The Role Of NTFs In The Metaverse: A General Overview

How to Give NFTs as a Gift

How to Boost Your NFT Project With Gift Card

3 Ways To Spend NFTs In The Metaverse

How NFTs Will Improve Metaverse Experience

How to Make Money in a NFT Bear Market

The Difference Between Web3 And Metaverse

How NFTs Are Made And How They Create Value

NFT Staking: How To Make Money From Staking NFT

How To Buy NFT In Nigeria

Things To Consider Before Investing In NFTs