Inflation has always been a major macroeconomic factor in the growth of the world economy and also a nightmare for economists.

Analysts and economists have always predicted the wave of hovering inflation even before it strikes. In an attempt to lose very little or nothing, investors would convert a portion of their portfolio to gold, to hedge against the risk of inflation.

Inflation simply means too much money in circulation for very few goods, hence making goods and services very expensive while reducing the value of money.

To many investors, keeping their money in the form of gold is the best way of beating the downward economic trend.

While this is a very good way to hedge against this volatility, there seems to be an alternative way which many investors today refer to as the “digital gold”.

Bitcoin and gold are good stores of value to navigate price volatility but many still argue that Bitcoin may be a better investment than gold.

We will examine five reasons why Bitcoin may have usurped gold from its position as the best investment treasure.

Difference Between Gold And Bitcoin

Gold has been the major store of wealth and means of exchange for many years in the markets and society at large. Bitcoin only surfaced in the market in 2009 and has already gained a large global recognition. Though they both serve the same purpose, there are few disparities between these two stores of value.

Gold is highly regulated in most countries such that you can’t cross a border with gold without any regulatory permission. They can only be bought from registered brokers too.

Bitcoin is also a safe store of value accepted across many countries but the regulatory framework that will monitor and control its use is not feasible.

The level of volatility between gold and bitcoin is not comparable.

Bitcoin’s price movement is always subject to the hype, media effect, investor speculation and sentiment. These factors cause panic buying or selling which makes the coin very volatile but this is not peculiar to gold.

Gold is a very liquid asset which you can move in and out of when need be. However, bitcoin is also a liquid asset but not as much as gold.

You may have a hard time liquidating your bitcoin when you want to exit the crypto market in a rush because many exchanges have a certain limit of liquidation per day. If you have more bitcoin, it will take you longer to convert your bitcoin to cash.

5 Reasons Why Bitcoin Could Be A Better Investment Than Gold

Have you been wondering which of Bitcoin and gold is a better investment? Here are some reasons why Bitcoin may be a better long-term investment than gold.

1. Bitcoin Is Scarce And Deflationary:

Many experts argue that gold is scarce, there’s a limited supply of gold which makes it a good investment, given a likely price increase.

Though this is true to some extent, the scarcity of gold is temporary as the supply is not fixed. It takes about 5-10 years for production to be reached in a new mine and this period will likely see a limited supply of gold. However, as the mining process is ongoing, there’s a good potential of digging out more than 50,000 metric tons of gold which will eventually decrease the price of gold as more gold is supplied.

On the other hand, Bitcoin supply is fixed at 21 million BTC that will ever be produced, at a known price, publicly stored in a blockchain and verified.

Since it’s impossible to identify all the gold stores and sites on the planet, it’s safe to say that Bitcoin is more scarce than gold. Therefore it is a better form of investment.

2. The Dollar Keeps Dropping Worth:

The US dollar has been stable in recent times but not always as it may seem. Traders have always known for the behaviour of shifting to gold and Bitcoin when the dollar value falls against other currencies.

Gold has always been an alternative asset for years but it is not wildly used or accepted in our digital world today. Many youths have never beheld a gold coin before, so this makes Bitcoin a better possibility that will smoothly infuse digitally into an individual’s life.

Gold is commonly called a “crisis commodity” as it is known for maintaining its value in times of geopolitical instability. People tend to spend money on gold during tensions to store wealth.

However, carrying objects of great value can be risky for people living in these conflict zones because they can be subjected to theft or loss.

Considering the digital nature of Bitcoin, it is safer for people to convert their funds and memorise the seed phrase. Upon reaching their destination, they can have access to their wallet and wealth.

Both gold and bitcoin have a common reputation for holding their worth in times of economic uncertainty.

In fact, this is an undisputed fact that further proves why gold has offered the highest wealth protection, historically.

However, it doesn’t always maintain its worth steadily.

An example is the fluctuating gold market trend from September 2011 to July 2020.

An individual who bought gold in that period would have to hold till July 2020 (9 years) to be at green again.

Bitcoin, even though volatile, has never exceeded 3-4 years before the price surpassed its initial all-time-high.

This suggests that Bitcoin could be a better investment option than gold. 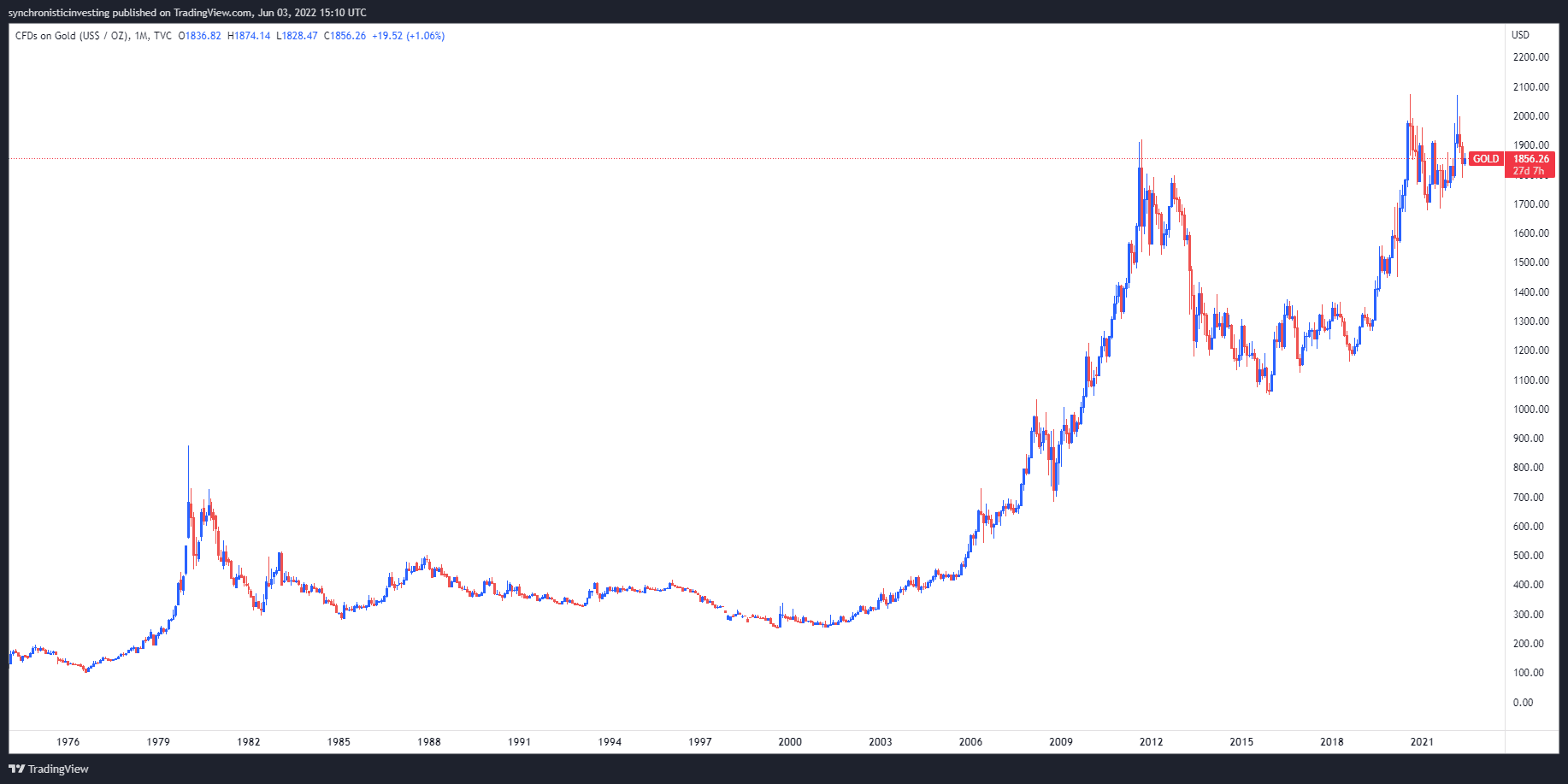 Even though people see gold as a good hedge against inflation because its value tends to rise at par with an increase in the cost of living, this assumption is not entirely true.

With the pace at which Bitcoin gained more value, holding such an asset which can outpace the rising cost of living in a world where the cost of living increases geometrically, will increase wealth rather than just maintaining it. 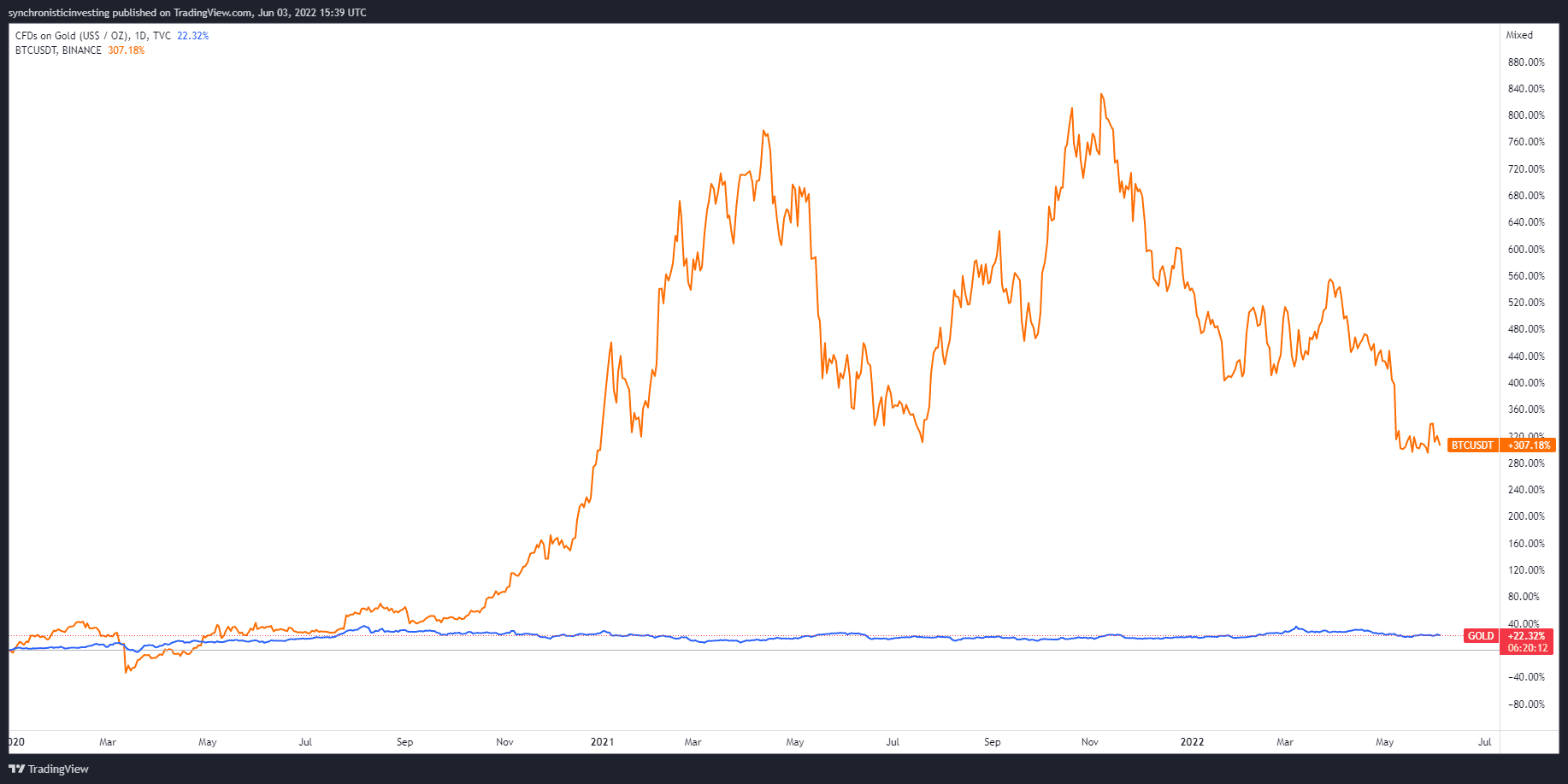 Gold and Bitcoin are no doubt very good investment options but the factors above are worth considering before making a choice on which to invest in. Even though this article has suggested that Bitcoin is a better investment option than gold, it is left for the investor to appraise both assets based on his metrics to make a better choice.

How Bitcoin Price Has Great Influence On Other Cryptocurrencies

Will Bitcoin Survive the Crypto Meltdown?

Why Bitcoins is Better than Fiat Money

How To Sell Bitcoin in Ghana: Changing Your Bitcoin to Cedis